With astounding monuments such as the Acropolis and Parthenon, Athens is a bucket listers dream city. But there is so much more to the capital of Greece than ruins, because their vibrant streets are ideal for wandering. 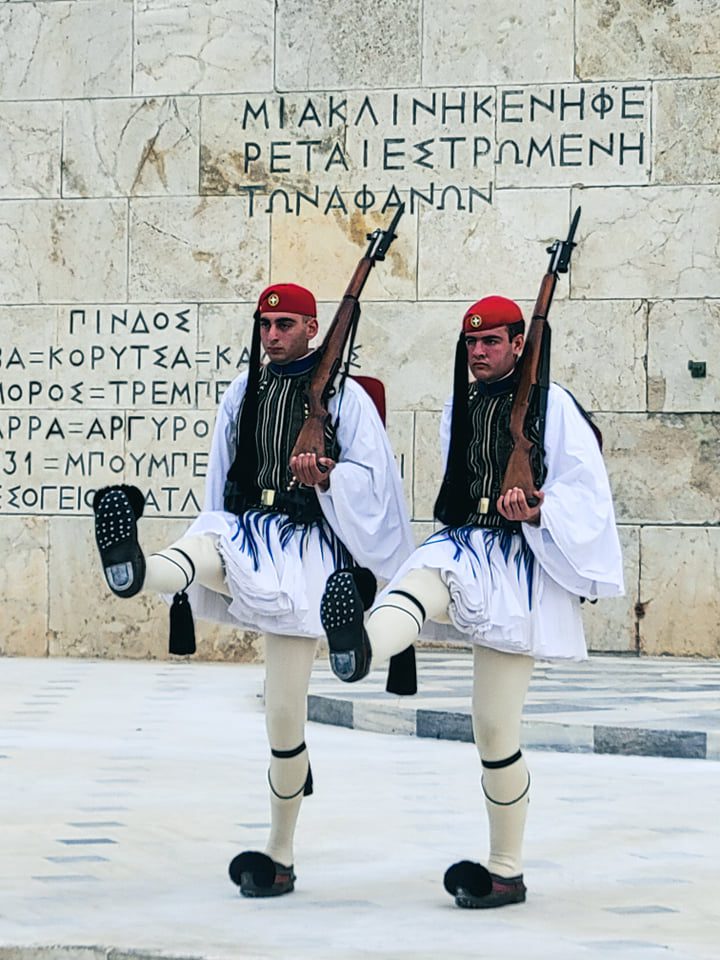 Of course, most of you will be excited to see what Athens has to offer, but fear not we have detailed everything you will ever need to know in our guide to visiting Athens. Within this article we’re going to focus on one of the main tourist attractions, namely the Changing of the Guards in Syntagma Square.

What is the Changing of the Guard in Athens?

Although we had seen the iconic images of the guards in their traditional uniforms, we must admit we hadn’t heard of Syntagma Square before we booked our trip to Athens. So, what is the changing of the guard and why is it worth your precious vacation time?

Within the neighbourhood of Syntagma is both the Old Royal Palace and Syntagma Square itself. The Palace was once home to the Greek Royal family, but it is now where the Greek Parliament resides. The square is positioned in front of the Palace, and it is here that you will find the Tomb of the Unknown Soldier which commemorates unknown Greek soliders who died during war. Syntagma Square in Greek means ‘Constitution Square,’ which is quite apt with its close proximity to parliament.

Because the Tomb of the Unknown Soldier is a monument dedicated to the military, guards known as Evzones are there to watch over it. They remain stationary and silent during their watch and then there is a changing of the guard on the hour, every hour. You will witness the Greek soldiers dressed in their traditional national uniform perform a ceremony before they are replaced by new Evzones.

During the ceremony you will find that the square can get busy with other tourists, so if you want a prime spot then get there early. Athens is an incredibly safe city for tourists, though we were warned that pick pocketing does happen on occasion. So just be aware that crowds such as those during the changing of the guards, can be prime spots for thieves. 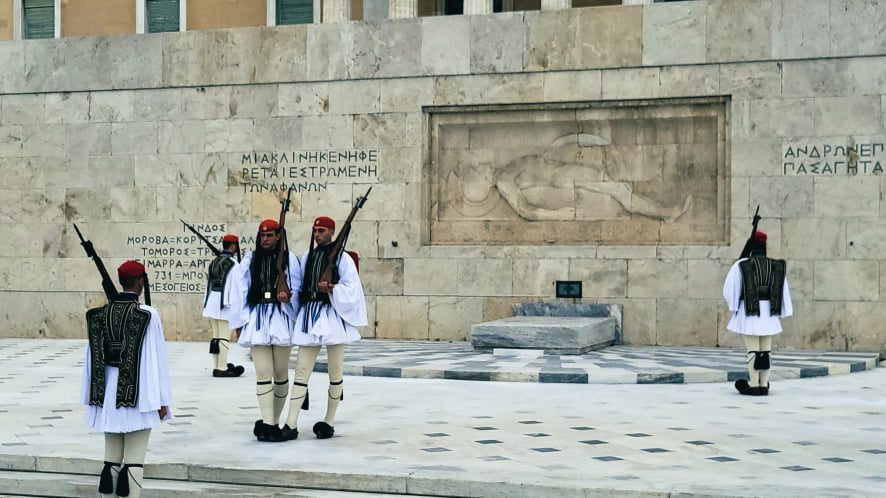 Although you can watch the changing of the guard all week on the hour, there is a special ceremony held every Sunday at 11am. During the ceremony the guards will display their official customs for about 15 minutes. In this special weekly ceremony, the Evzones wear the traditional uniforms of the 1821 Greek freedom fighters.

If you want a quick glimpse, then take a look at our Changing of the Guard Official Ceremony video on our YouTube channel.

Who Are the Evzones?

These soldiers are known as Tsoliades, and they are a special unit in the Hellenic Army. Not only do they guard the Tomb of the Unknown Soldier, but they also protect the Presedential Mansion (which was the Old Royal Palace).

Within Greece the Evzones are seen as a symbol of bravery and courage. Their duties consist of;

To be an Evzone you have to be a certain height and in peak condition physically and mentally. They are judged by their character and morality, because the guards will go through challenging training sessions before being accepted. As you would expect, the training includes keeping the body and mind still, because not only can they not physically move, their face and eyes cannot move or show any expression. 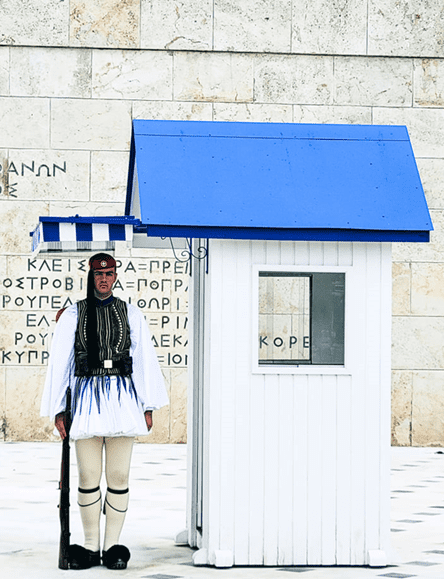 As we have mentioned above, the Sunday uniform during the 11am changing of the guards is a special one. It has a historic meaning, because it signifies the uniforms worn by the Kleftes and Armatoloi. They were Greek warriors who fought in the 1821 War of Independence against the Ottomans. The uniform even has 400 folds within the skirt which represent the 400 years in which the Ottoman occupied Greece.

To give you a bit of a breakdown, the uniform is made up of;

On the other days you will see the Evzones wearing the doulamas, which is a representation of that the soldiers in the Macedonian Struggle (1904 – 1908) would wear. When we went it was the blue winter uniform, but it is brown in the summer.

What Makes the Changing of the Guard So Special?

For us, the answer is incredibly simple, tradition. You get to see the traditions that are important to the Greek people and the respect shown to soldiers who died to protect the country. It’s also an incredible sight to witness, because the Evzones have a set routine they must complete before they leave their post which includes a funny walk. It is said when King Otto moved from Bavaria to Greece, he missed the noise of horses. So he made his guards walk in a manner which would replicate the sound of a horse, so that he felt at home.

Also there are very few things we get to do when we travel which are free, but this is one of them. Just make sure you get there early, we’d say fifteen to twenty minutes before the hour, so you can get a good spot.

Our top tip is make sure you wear comfortable shoes, because you will be stood for a while, before and during the ceremony. We hope you enjoy the changing of the guards on Syntagma Square as much as we did. Tag us on Instagram with your wonderful pictures.